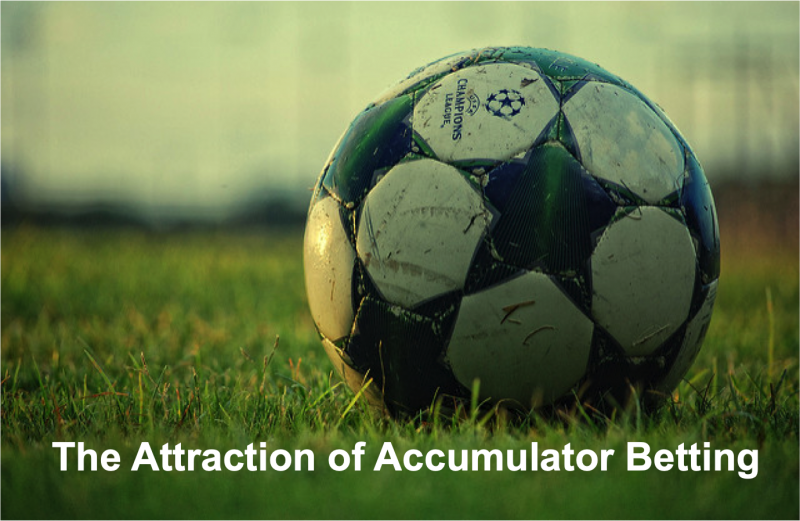 Why do punters love accumulators? The simple reason is because for a small stake you can win a lot of money. In rare cases you can win life-changing amounts of money. For most though accumulators represent a chance to win between £100-£300 for a very small bet of say £5 or £10.

The above seems like great value, but surely there is a catch, and of course with any betting comes risk. The more selections you add to your accumulator, the more money you will win but the more risk you will also take on.

Imagine for example you picked two different teams to win (a double), seems nice and easy, but it only takes one of those teams to even draw for you to lose. Now in order to win a few hundred pounds you would have to pick at least six teams to win, providing they are just odds on, which make it increasingly likely at least one of those six teams will either lose or draw.

What can you bet on?

The beauty of accumulators is that you are not restricted to just picking winners. You can pick over or under goals, both teams to score, corners, bookings, and you can mix these up. For example you could have the following on your betting slip, a fivefold acca.

The above represents when things can get exciting in accumulator betting, and shows how you can mix and match some less common selection choices. The advantage here is that you are taking on different outcomes to happen in each match, outcomes that could well happen week in week out, but you have to do your research in order to know these patterns. How many times in Everton's games we would see 4 or more corners in the first half, is it a high percentage? How many corners do Manchester United get when at home and so on.

Are accumulators for punters or pro's?

As already covered on our Premium Accumulators page, one of the advantages of the accumulator bet is that it is usually very affordable to football fans as long as they keep within their limits, so any losses do not have to have much of an impact. Many the length of the country will have no problem to stake £5 on 15 different results coming off each weekend. They almost know as they put the bet on that it won't win, but there is no denying the thrill of going for a huge win is very exciting and a lot of fun. And of course bookmakers are more than happy to accept these less sensible type of bets, because even if one punter strikes lucky they know that thousands won't.

A genuinely useful advantage to accumulators however is the "cash out" option. This comes in extremely handy for accumulators, as most fixtures have different kick off times, therefore if your first few selections have won and you're feeling a bit worried about your last couple of selections, you can choose to cash out your bet and still make a healthy profit, whilst removing the risk of the final selections.

Picking a winner of a match can be very difficult especially in the lower divisions where form can go out of the window at any given minute. So in recent years backing over 1.5 goals to happen in a game has become increasingly popular. This bet requires that if at least 2 goals are scored in a game then you have won your bet. Now there are many more goals on average scored in the lower divisions, so this bet can become quite useful. The draw back however is the prices, which sit around the 1.30 mark, and sometimes even lower. Once you build an acca though these prices can be worth it. For example picking 10 of these games to be over 1.5 goals at a £10 stake would return in the region of £160. This bet is good in the fact that some selections can be won within the first 30 minutes and usually if not the score could be 1-0 by the end of the first half, giving a good chance one more goal will be scored in the second half.

Everyone has their own accumulator preferences but there are markets to avoid. For example picking last goalscorers or correct scores. It can be hard to pick just one anytime goalscorer let alone the last goalscorer. As for correct scores, forget it. Yes the prices are huge, for example if you picked out three different games to finish 1-0 for £10 you could win over £3,000, a fantastic return, but also a clear indicator of why it is so hard. Make paper bets with your friends and see how hard it is.

To summarise, accumulator bets can be good value, but they are not to be mistaken for more serious bets, however with some research it is very possible to make some great profits. There are so many markets out there now and the best bets are probably to mix them up a bit and not stay with the same market. Accumulator betting will always remain popular because of the human psyche, no matter if we are shopping at Ikea, or trying to win a little bit of money, we always love some value, and this is a bet which offers that in spades. Just remember, you will go through periods when one selection just keeps on letting you down, but don't worry it happens to us all, and it's often a good idea to use a bookie that will give your money back if your acca only loses by one selection, there are plenty around.